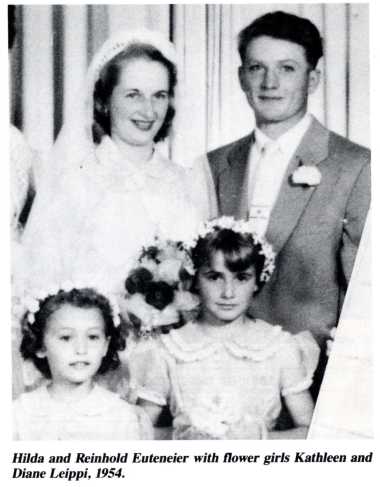 Having spent their whole lives in the Kronau area, committee members Reinhold and Hilda Euteneier might be some of the best equipped to discuss the community’s history – especially since their history and the community’s are one in the same.

There’s five of us around the museum table, but Grant Fahlman, Ron Euteneier, and I feel more like observers than participants in the current conversation. The memories flowing are those of the committee members’ years at school, and this was the exact time that Reinhold and Hilda (Leippi) began to go out.

Hilda is laughing. “We went to school together, church together, everywhere. We just knew each other all the time.”

Me: “And when did you start to date?” My question causes more laughter to erupt from the pair.

There’s some back and forth before Hilda decides she must have been 14 years old. “If I was born in ’35… figure it out.”

The math comes to 1949, but Reinhold’s doubtful.

“That musta been somebody else,” he jokes.

Having married in 1954, 2016 will mark their 62nd anniversary. Their stories of having dated in the forties contrast greatly with my generation’s dating trends. Without cell phones and Netflix – or even cars, at the beginning! – the years that have passed, and the accompanying culture, suddenly seem too heavy a conversation for the museum table.

“He’d come down and see me at home in town here in the evening, if you wanna call that a date already. But he’d come with a car and even with the horse, if it was wintertime. He had a – well, you explain the cutter you had… what do you call that?” Hilda turns to Reinhold.

He knows what she’s talking about immediately and the way he avoids contact could be caused by either modesty or chagrin. Whichever it is, Reinhold explains. “[It was] a closed-in sleigh with a stove and lights in it.”

“And a radio,” Hilda juts in. She isn’t about to let the conversation move on until proper recognition is given to the smooth operation Reinhold had been running.

Even Grant seems to be wooed by Reinhold’s moves. “[That’s] pretty classic stuff,” he comments.

With a little imagination, I can see how this pimped out sleigh is equivalent to today’s lift kits and FM transmitters. Hilda was helpless but to fall for Reinhold and his fancy wheels – I mean, runners.

When they weren’t playing cards, the two curled and attended community events.

“There were a lot of dances in Kronau years ago,” explains Hilda. “Christmas dance. New Years dance. Easter dance. Lots of them. We always went to those.”

Hilda had attended Old Kronau School for her first four years, but started at Saar in 1945 when her family moved into town.

A year younger, Reinhold went to school for nine years to complete his grade eight. “Those days, there, things were a little different. You had a farm and [went] to school, and that didn’t work after a while. I lost interest in school and I wanted to farm. So, I didn’t make my grade eight the first year. The second year I made it.”

Shortly after, he began his own operation.

“Nineteen fifty I started farming. Lost my shirt, should’ve quit right there,” Reinhold laughs. “I got froze out 100 per cent. It was… it was not very good. Well, tried in ’51 again and it was pretty good in ’51, but it was wet. Everything was damp, but we had a good crop ’51.” Although he found the first year discouraging, Reinhold explained that it’s the nature of the business. “You have to keep on.”

During that time, Hilda had worked at Safeway and the Wheat Pool.

“And then I got engaged and when you worked at the Wheat Pool and got engaged, you couldn’t work there anymore. So then we got married and farmed. And that’s where I still am.”

Reinhold and Hilda may still be in the same community, but the 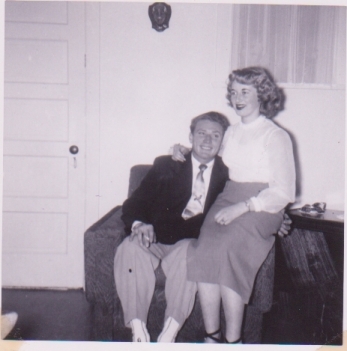 ir lives have changed since the 1940s. The two raised their own four kids on the farm at Kronau and since then their family has grown to include eleven grandkids and twelve grandkids.

“I always say, ‘I’m the richest man in the world because I’ve got that family,’” Reinhold brags. “That means a lot.”

Hilda feels the same. “If I had to live over again, I’d probably do it the same way.”

Right: Reinhold and Hilda during their relationship’s earlier years, circa 1953.